Showing posts from April, 2009
Show all

The CPCC Skyline Run, which begins and ends at the campus of Central Piedmont Community College, is one of Charlotte’s premier 5k races and is the second race in the Run for Your Life Grand Prix series. This year’s race was held in conjunction with the Festival on the Green, which is an arts festival sponsored by CPCC. The race was the first thing on the agenda and it was over before the arts festival really got started, but the race itself was plenty festive on its own and it was a magnificent day for about a thousand runners (843 finishers) to bring nearby traffic to a screeching halt. The course was pleasant, with most of the small hills out of the way in the first mile. The race started on a small street next to Memorial Stadium and the thought crossed my mind that I would surely be trampled if I happened to trip near the beginning because there was really no place to go as I was standing next to the stadium wall. No worries though. Everything started out smoothly and it seemed l
Post a Comment
Read more 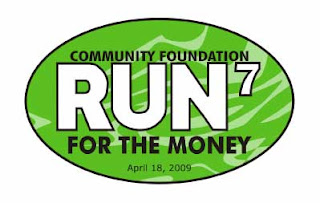 This was my 28th race since I began running last September, but my very first race in my home town of Gastonia, North Carolina. It was exciting to finally run a race in Gastonia, and for the third time in my last three 5k races I again broke my personal record, this time at 22:15, finishing 72nd overall out of 750 runners. Sadly for me, although I had the fastest time among the 55-59 year-old runners, this race had 10-year age groups and a bunch of guys 50-54 outran me so I ended up in 8th place of 35 runners in the 50-59 age group. You know me — I’m not one to complain (just kiddin’) — but save the 10-year age groups for races with 75 people in them, not the ones with 750 runners! Just to get all of the bad stuff out of the way at the beginning, the one other problem with this otherwise excellent race was that there was no after-race food for the runners. Hey, we’ve come to expect that little perk and this was the first race in 28 races that had zero food. Other than those two litt
Post a Comment
Read more 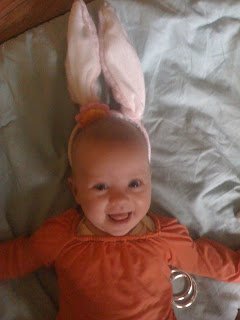 Although we were scheduled to run the All-Star 5k in Asheville this weekend, when we hopped out of bed this morning we decided to change ears and head over to the Bunny Run 5k in Concord instead. I didn’t have a picture of the race logo so I’ll take this opportunity to attach a picture of my 4-month-old granddaugther Eva wearing her bunny ears. I think all of that running I’ve been doing in Asheville is starting to pay off because the considerable number of hills didn’t seem to phase me today, and I finished first in my age group and 24th overall out of 225 runners with a time of 22:55, which is my new 5k personal record (yay!). In addition, as opposed to last week’s 10k in which I walked a total of 10 times, this week I ran without any walk breaks at all. It’s not something I planned really, but I just do these little mental checks often in a race and ask myself if I feel like I’m about to croak, and today my ultimate demise didn’t seem to be imminent so I just kept on running. The a
1 comment
Read more

I never met a hill I didn’t like — to walk up, that is. My thanks once again goes out to Jeff Galloway, thinker-upper of the Run-Walk-Run method that allows people like me who may not feel like running all the time to finish the race without feeling guilty about doing some walking. Matter of fact, it occurred to me during this race that maybe I should have left my running shoes at home and just wore my old walking shoes instead. As you can see in the graph below where each spike represents a slow-down walking pace, I walked ten times during the race. Some refer to it as “Gallowalking,” and those of us who do it are sometimes labeled as “Galloweenies,” but as advertised, it not only doesn’t slow you down a lot in the end, it might also actually result in a better time than if you run the whole time. My time of 49:47 in the 10k was good enough for second place in my age division and is probably about as fast as I can run a flat 10k, so bring on them hills and hand me down my walkin’ can
Post a Comment
Read more
More posts