Showing posts from September, 2019
Show all

Now in its fourth year, the Stop Soldier Suicide race keeps getting better and I've now run all four times that it's been held. Race director Ronald Rhodes always does a good job with the little details that makes it an enjoyable experience for all the runners who participate. For the first time, this year's race was held at South Point High School instead of downtown, and that made parking much better. The course remained almost the same except for the start/finish location and the route was reversed, which was a good move since it made the course flat over the last mile instead of a tough uphill. The 10k course was exactly 6.22 miles according to my Garmin, which is perfect, but I heard a few 5k runners say the 5k course was about a tenth of a mile short, so maybe that'll be fixed next year. Although the 10k course remained basically unchanged, the 5k course is different now, which on the map looked to me straight out and back and almost completely flat so there w
Post a Comment
Read more

My 115th -- and possibly my last -- half marathon. There's a chance it's not the last, and as I write this a few days after the race I feel great. I didn't get injured and my time of 1:53:26 wasn't terrible, and it actually extended my streak of sub 2-hour half marathons to 114 in a row, possibly my biggest running achievement. For the record, my first half marathon back in 2008 was 2:01:05, and all of my half marathons since then have been under 2 hours. I do feel though, at age 67, running 13 miles in a race is getting to be a little too much. I didn't exactly struggle to finish as I did a few times last year, but I definitely felt uncomfortable the last few miles of the race. I think for me that dropping back to the 5k and 10k distances would make life a little easier and more enjoyable, and it might also prevent me from an injury that might be more likely as I age. The Run for Green Half Marathon is one I've run several times over the years. It's fa
Post a Comment
Read more

Oy vey! Here's a race destined to be remembered as one of the biggest stinkers of all time! It's not just that there were no monitors along the course, or that there was only one water stop for the 10k, or that there were no mile markers along the way, or that the bananas were green and the water was hot. Of 470 races that I've now run, this was the first one I can remember that had NO AGE GROUP AWARDS. At all. Not only that, but the race director acted indignant that anybody would even broach the subject, what with this being a good cause and all. Well ya know, almost every race is in honor of a good cause. She added that, "If anybody sees that they finished in the top 3 in their age group and wants an award, let me know afterwards and I'll be sure to mail you one." Lady, that's not the point, and if it has to be explained to you, never mind. Keep the award. The course is actually a good one along the greenway at Catawba Meadows Park. It's fl
Post a Comment
Read more

This was the 2nd year of the Jaycees Labor Day 5k and this year it was hosted in a new location. Originally at the now defunct Rivermen Brewery, this year it was hosted at The Lodge Tavern & Tap , another Belmont establishment just a block over from the original location. We were told the course is still certified and I was glad to see that the distance was correct. This was my third race in three days of Labor Day Weekend, and since I'd won my age group in the first two I thought it would be nice if I could get this one as well. Mark Jackson, a fast 66-year-old from Huntersville, wanted to make sure I had to earn it. I managed to squeak by him by just a few seconds in the end, and I thanked him for the push. I would have probably won my age group without him there but no doubt I would have been a little bit slower without him breathing down my neck the entire race. The star of the race though was Ben Kassel, who not only was the overall winner of the race that started at
Post a Comment
Read more 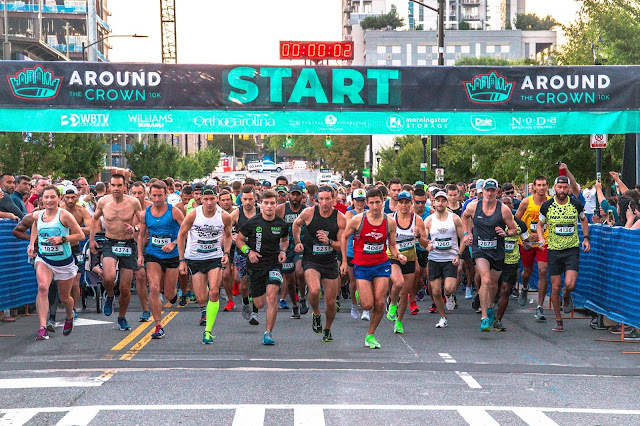 This was the inaugural year of the Around the Crown 10k and it was quite the extravaganza. There was a ton of hype in the months leading up to the race, and when race day came the hype seemed to pay off. There were around 4,000 finishers, making it one of Charlotte's biggest races in its first year. The big draw was that I-277, the loop around uptown Charlotte, was being closed off for the first time to allow runners to race on it. I arrived over an hour before the start but so did a couple thousand other people. I could have parked in the dirt lot just below the baseball stadium for six bucks but decided to go around the block and see if I could do better on parking. That was a bad idea and I fell in line with everybody else going into the big parking garage closest to the stadium. Not only did it cost me $12 to park there, but after the race it took me an hour and a half to get out of the garage! That's a mistake I won't make next year. The race itself was a lot of
Post a Comment
Read more

This is my fourth year in a row to run this great 8k in the mountain town of Hendersonville. It's always well managed, and while the course does feel a little hilly, the elevation map says it's really not all that bad. I've won my age group all four times I've run it, but keeping me humble is George Luke, who's now 79 years old and has beaten me 3 of those 4 years, this time by about a minute. He's a phenomenal runner and holds multiple South Carolina state records. It'll be interesting to see how he does next year at 80 years old. I'd love to see him demolish some of the 80+ records. I'm writing this on Thursday following the race and the site says photos will be coming soon so I'm counting on that in my race rating. They always have some great photos taken by the local camera club and I talked for several minutes to two of the photographers whom I'd met before, so I might come back and update this post with a photo or two after the pics
Post a Comment
Read more

With less than 100 feet of elevation gain in the entire race, this is one of Charlotte’s flattest road races, and also one of the fastest. It always brings out some of the area’s fastest runners and is also one of the largest 5k’s with over 1,000 finishers. I really wanted to finish in under 23 minutes but didn’t quite make it; however, I still managed to win the 65-69 age group with a chip time of 23:05, and even better for me, it was the first race of the year that I managed to run without stopping to walk. I should probably mention that I stayed away from this race for a number of years because the race website warned that parking is very limited in the area and they give some options for parking at other locations or recommend you carpool or take the light rail to the nearest stop. I’ve found over the past two or three years of running the race that parking is actually pretty easy to find nearby, especially if you arrive an hour before race time. I’ve been within around 200
Post a Comment
Read more
More posts