Showing posts from June, 2010
Show all 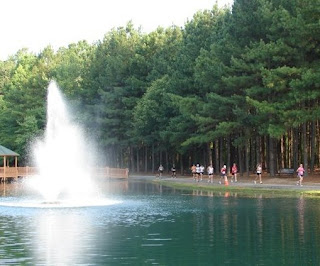 The Freedom Run 5k is part of Oakboro’s annual week-long 4th of July celebration.  Oakboro  is a small town in rural Stanly County with a population of about 1200 residents. We had never been there before and were surprised that it didn’t seem nearly as small as it sounds, apparently because being in a rural area without a lot of towns it brings in quite a few visitors from outlying communities. Albemarle is up the road about 15 miles away, and we were happy to find out that Peter Asciutto of  Vac & Dash  was doing the timing for the race (although the race was actually managed by the local fire department). As described on the Active.com race page, the course was “pretty flat,” with just a few little hills along the way. It was hot as usual for any race this time of year, but much of the course was along the trails of the Oakboro District Park and provided some much needed shade. I heard a few complaints from runners who didn’t like running along the crushed gravel pathway, and i
Post a Comment
Read more

It was all Summer and no Breeze at this year’s Summer Breeze 5k that starts and ends in Freedom Park. It’s a popular race in Charlotte that has been an annual event for about the past 30 years. It was a nighttime race until two years ago when it switched to Saturday mornings, and it’s one of the few races in the area that has separate starting times for men and women, with the women going out at 7:30 a.m. and the men going out a half hour later at 8:00. For me personally, I was all sizzle and no steak. I seem to be a notoriously slow starter anyway and there’s quite a bit of uphill in the first mile of this race. Maybe I need to develop a better pre-race warmup routine or something, but for whatever reason, in the first mile of most races (including this one) everything seems to come unglued for me. In the longer races such as half marathons or even 10k’s I’m able to start more slowly and gradually work my way up to speed, but in the 5k races if you take a lot of time getting out of t
Post a Comment
Read more 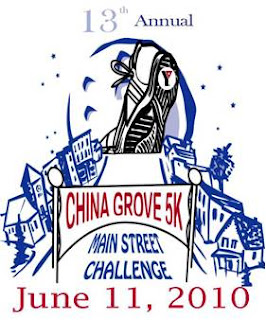 It was a hot, steamy night in China Grove for the 13th annual Main Street Challenge. I dislike cold weather so much that I really don’t like complaining about hot weather at all, and since we all knew it would be a steamer before we got there, it’s all part of the adventure. Like it or not though, the wheels don’t seem to turn quite as quickly when you’re running on a hot summer night with a temperature of 85 degrees and I think quite a few folks ran slower times than they normally do although Jordan Kinley, the overall race winner, blazed the trail at 15:05. I’ve been stuck in the 21-minute range in 5k races for a while and didn’t feel great going into this one, so I was happy to finish in 20:57 and win my age group just ahead of Steve Staley. Steve always provides me with a little extra motivation and since I knew he was right on my heels it helped me stay focused. Other than one or two gentle inclines that are barely noticeable it’s a flat out-and-back run all the way with the only
Post a Comment
Read more 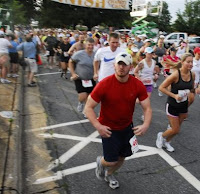 It’s been more than 30 years since I moved away from Hickory, and since I left they’ve installed dozens of new hills and a new heating system that worked like a charm today. Ever since I started running and heard that Hickory had a half marathon I wanted to run it, but last year I was sidetracked by the Grand Prix series in Charlotte that has a race on the same weekend. This year I’m skipping Charlotte’s Grand Prix series because of several scheduling conflicts I’ve had, and when Bob Duckworth, who is an old friend from high school as well as general manager of Cheerwine, one of the sponsors of the race, offered me four free entries I jumped at the chance to torture myself for free! Before the race we met up with some running friends — Sharon Davis from Albemarle and her friend Rita, and also  Drew Walker  from Greenwood, South Carolina. We also saw Kim Oates from Shelby, who said for some reason she couldn’t talk any of the other Shelby runners into coming over and tackling the hills
Post a Comment
Read more
More posts