Showing posts from October, 2013
Show all

After the debacle at Saturday's race in Grover, I was looking forward to what I felt sure would be a much better race in Salisbury on Sunday afternoon. I had been looking forward to the Spooky Sprint 5k, partly because it would most likely be warmer than most other late October races since it was an afternoon race, and partly because it's one of those rare races that actually has a Senior Grand Masters division. If you're unfamiliar with the Masters categories, the Senior Grand Masters includes runners who are 60 or older, the Grand Masters are runners who are 50 and older, and the Masters are runners who are 40 and older. In some areas of the country those divisions are included most of the time in their races, but in this area they are rare. Some races in our region include a Masters category, and every once in a while there will be a Grand Masters, but I've seldom seen a Senior Grand Masters in this region except in the RRCA state championship races. Going into
Post a Comment
Read more 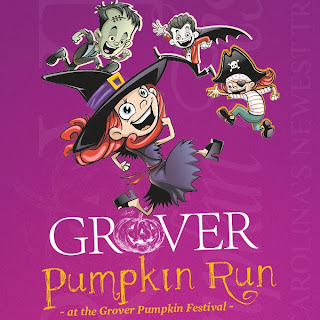 This was possibly the least organized race I've ever run. If all races were like this I'd probably revert back to being a mall walker. I arrived in Grover having read in the directions that the race was on "Main Street." Okay, that sounds simple enough since Grover is just a small town. Since the race was being held in conjunction with the Grover Pumpkin Festival I thought it would be easy to spot, and sure enough, there were hundreds of people gathered for the Pumpkin Festival, and it was nice. Lots of good-smelling food (although I was trying to watch my diet), great entertainment with a band on stage that sounded surprisingly good I thought, and lots of people, many dressed in Halloween costumes. I found the nearest parking space I could find, which was probably at least a quarter mile from the action, and walked up to find the race registration area. I walked completely to the other side of the festival without seeing anything, so I asked three guys who were
Post a Comment
Read more

Just a week after a mediocre showing at the Rocktoberfest Half Marathon in Charlotte I decided to do a better job of keeping my mind in the race at Myrtle Beach, and it paid off. No doubt the Myrtle Beach Mini Marathon is a flatter and faster half marathon than Rocktoberfest, but cutting more than 5 minutes off my time from the previous week had more to do with my state of mind than the flatness of the course. Oh, and it probably helped that I've lost a few pounds since getting back on the Weight Watchers wagon a couple weeks ago. I know I'm not exactly obese, but I did my best running in the fall of 2011 when I weighed 138 pounds. Before getting back on Weight Watchers recently I had gained some weight and was back up to 153 pounds, so I'd really like to knock off 10 or 15 pounds and get back to my ideal running weight. My time of 1:34:24 made this my fastest half marathon of ten that I have run this year and I finished in the top 3% overall (76th out of 2,759 runners).
Post a Comment
Read more 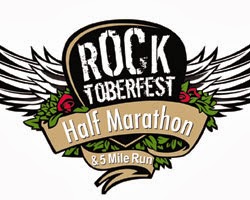 This was my first half marathon since June, and I'm pretty sure it's the first time in the past four years I've had three months between half marathons. I finished 49th overall out of 491 runners with a time of 1:39:44, and while I was happy to be under 1:40, I was actually hoping to run under 1:37. I did get a little complacent after Butch Holt ran off and left me and I decided that my fate was sealed as far as where I'd end up in the age group, so I started taking walk breaks. It was hilly and I was tired but with some pressure I would have probably tried harder. I took a quick glance in back of me and didn't see anybody who looked like they might be in my age group (it's usually easy to spot the old guys) so I decided to go for a nice long stroll about 12 miles into the race, figuring that most likely any other 60+ runners would probably still be a good distance behind Uh... big mistake. After I walked 30 or 40 seconds here came William Morrell, who you may
Post a Comment
Read more
More posts