Showing posts from February, 2012
Show all

For the second year in a row the weather was just about perfect for the Myrtle Beach Marathon, Half Marathon, and 5k. Last year was my first year to run the half although I was also there the previous year (2010) on that notoriously cold and wintry weekend when the race was canceled because of a freak snowstorm. This year though, just like last year, it was a little chilly at the start and by the time the race ended the temperature was up around 60 degrees and before the day was over we were able to enjoy a couple hours at the beach before heading home Saturday afternoon. I didn't have any huge aspirations for this race since lately I haven't been running quite as well as I did last fall. With last year's time of 1:34:19 I ended up in 4th place in the 55-59 age group and I thought it would be great to finish in the top 3 in the age group this year but in a race this size that draws a lot of top runners from all over I knew that wouldn't be easy or likely. I figured
2 comments
Read more 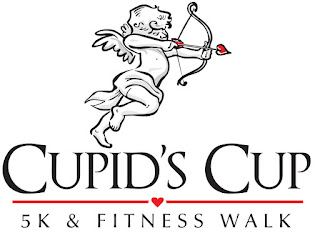 With the big half marathon in Myrtle Beach next week, I considered just taking this entire weekend off to rest up a little, but Friday night as I trudged along on the treadmill for just an easy mile to keep my streak going (now 247 straight days of running) I thought about how lucky I am to be able to run at all since so many people my age aren't able to, and as soon as I completed my obligatory mile I hopped off the treadmill and told Linda she could sleep in and I would go over and run the Cupid's Cup by myself. She was all for sleeping in and since we have another 5k scheduled for Sunday afternoon she didn't feel too guilty about it. It's always fun to run the major races in Charlotte because so many running friends show up, and this is one of the best cold-weather races of the year. The big cold front was due to come in on Saturday afternoon so despite being pretty cold, it wasn't nearly as cold as I was afraid it would be, and just like last year there we
Post a Comment
Read more 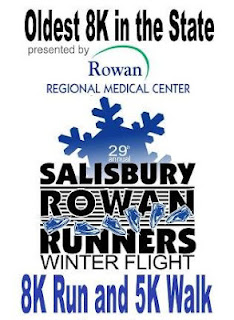 This was one of those days that I could have just stayed in bed -- kind of cold and dreary, with just enough rain to make me miserable on a chilly February day. There was no sleeping in for me though. The Winter Flight is a special race, one of the winter's finest, and especially so this year with the race being a part of the Running Journal Grand Prix. I'm currently in 1st place in the 55-59 age group but will be switching age groups after the next GP race (Myrtle Beach Half Marathon) and won't be eligible for any more points in the 55-59 group after that, so I'm trying to make it hard for anybody to catch me. There was also a special appearance by former Olympian Joan Nesbit Mabe, who represented the US in 1992 and again in 1996. She just turned 50 and came out to try and break the state 8k record for the 50-54 age group, which she did. I bundled up as usual, looking around at the starting line to see who else might be wearing gloves, a warm hat, and tights. I was
2 comments
Read more
More posts