Showing posts from January, 2013
Show all

For the past couple years on this date I had run the half marathon in Travelers Rest, South Carolina, but this year since I've decided to cut back on the half marathons I opted instead for the Race for the Grasshopper, a well established 5k (I think it was the 30th year) held at the Cowpens National Battlefield, which is not too far from Gaffney. What struck me more than anything about this race was how many great runners there were who were over 50 years old. The Upstate of South Carolina has a reputation of having some amazing runners and a bunch of them were there. I did manage to end up in 1st place in the 60-64 age group at 21:23 (my best 5k time since last July), but only because 64-year-old David Spark came in 2nd in the Grand Masters with a time of 20:44 and I was bumped up. Even more remarkable than that were the times of 53-year-old Susi Smith (20:20), 57-year-old Dian Ford (20:33), and 72-year-old George Luke (21:17). It's not terribly surprising since all th
1 comment
Read more

It was 25 degrees when I woke up at 4 a.m. and I had no intention of racing since cold weather and I don't get along. Then about 5:30 I noticed that the full "Prefontaine" movie was on YouTube. "Nice way to spend a cold Saturday morning," I thought to myself. Well, that didn't last long. A full 7 minutes and 29 seconds into the movie I was all pumped up, so I put on my running clothes and headed out the door. This was the inaugural 5k memorial race dedicated to Joe Davis, who lost a battle with drug addiction a few years ago. The race was managed by Start2Finish, the same people who did a great job with the Huntersville Half Marathon recently. There were 474 pre-registered runners, which is quite a big local 5k, especially for this time of year. Of course a lot of people didn't show up but there were still around 400 finishers. I wore two Under Armour Cold Gear shirts with a singlet on top as well as tights (usual for me in the winter) and my lig
Post a Comment
Read more 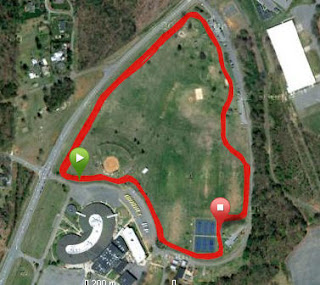 One of my New Year's resolutions is to stop wasting so much time writing my blog, so don't be surprised if I keep it short. I do want to keep documenting my races and anybody interested is welcome to see how I did, but even I don't want to read (or think) about all of the minor details. This race and the full marathon were added on to the Freedom Park Ultra 24-hour race, which is the main attraction. After finishing the Huntersville Half Marathon in December in 1:42:00 I wanted to fit another half marathon in and see if I could get back under 1:40, which I managed to do -- barely -- with a time of 1:38:58. It was just 3 seconds slower than in this same race last year though so I'm happy with my time. I'm hoping I can stay under 1:40 for a while longer. I was also glad to see that my splits were much more even than I usually run, with my fastest mile (#3) being 7:11 and my slowest mile (#11) being 7:55. The race is on the 1-mile walking track next to Freedo
1 comment
Read more
More posts