Showing posts from February, 2013
Show all

What a week! On Monday I developed "an issue" that I'd rather not broadcast to the entire world. Suffice it to say I was uncomfortable enough that in order to keep my running streak of 600+ days alive I limped and plodded and agonized as I "ran" a mile in approximately 16 minutes. It was possibly the most difficult mile I've ever run. If this race had been three days earlier or my "situation" had occurred three days later there's no doubt that I couldn't have even made the trip to Myrtle Beach, let alone run the race. I managed to run a total of 7 miles in the 5 days preceding the race, which worried me a little but I was reassured by some level-headed runners that it would work as a nice taper, and as long as I was able to run on Saturday I'd do fine. The fact that everything had already been paid for (race registration, hotel, etc.) was beside the point. For me, this is one of my most important races of the season. It's the
3 comments
Read more 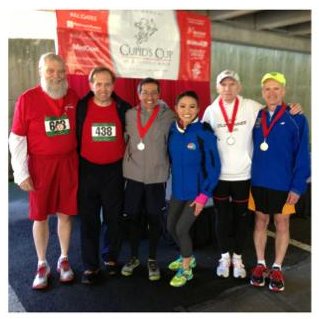 (L-R) Ralph Shore, Jeff Linson, Rodolfo Sequeyro, Channel 36 news anchor Dion Lim, Richard Hefner, and Bob Nelson. After having made excuses for the last three weeks for not running a race (mostly because it was too cold), I decided that if I wanted to still be considered a runner it might be best if I'd actually run. I was eager to get back into the mix, as the Cupid's Cup 5k has been one of my favorite 5k races for the past couple years and also one of my fastest. I was fairly pleased with today's time of 21:11 (chip time) although it was considerably slower than last year (20:31) and even slower than the previous year (20:12). I do hope that's not a permanent trend but now that I'm 60 and have been running for a few years I'm not looking for a PR and I'm pretty happy to be near the top of the age group and relatively healthy. Once again I finished second in the 60-64 age group to my friendly foe, Bob Nelson, who got about a 20-second jump on me in t
1 comment
Read more
More posts