Showing posts from October, 2009
Show all

Here’s a race that is quickly becoming one of the Charlotte area’s must-run events. In 2007, the first year of the Runway 5k, there were 312 finishers. On a rainy Saturday in 2008 there were slightly more runners, with 377 finishers. This year it exploded with a total of 1,343 runners finishing the race, not counting hundreds of walkers who ambled around the course without chips to record their time. It really is an exciting race as the airport closes one of its runways for the event and it’s like no other race as planes take off and land nearby. Best of all, it’s almost completely flat and definitely a race to run for anyone looking to set their own Personal Record (PR) for the 5k. It had been almost a month since I had run a 5k, having instead run a couple of half marathons, a 15k, and an 8k, and since I had been running pretty well at the longer distances I thought I might have a shot at a PR on this flat course. I felt great, the weather was perfect for running, and I managed to b
Post a Comment
Read more

October 24, 2009
It was one of the few nighttime races we’ve run, and now I remember why — you can’t see anything in the dark. There were supposed to be luminaires lighting the way, and there actually were some, but it looked as though they might have either run out of luminaires or volunteers who were willing to put them out, so the course lighting left a little to be desires. It actually wasn’t much of a problem. There were streetlights illuminating the way throughout most of the course and the weather was perfect. The course itself was one of the worst. After leaving the hospital drive we took a left turn up a fairly steep and long hill. That wasn’t too bad in itself but the 8k course took us for three loops around the same circle, so we ended up having to climb that same hill three times. Not that anybody would cheat, but anyone could have easily just done two loops around the circle and went straight to the finish and I’d be surprised if some people didn’t do that. Linda said they tried to direct
Post a Comment
Read more

The Lung Strong 15k was the final race of the 2008 Run for Your Life Grand Prix, and also the longest race in the RFYL Grand Prix series at 9.3 miles. I’m fine with that distance but before the race I was a little worried about my wife Linda, whose longest previous run (even in training) was 10k (6.2 miles). I’m happy to report that she sashayed through the course without any problems at all, so we both completed the Grand Prix series and ran in every race of the season. If I haven’t mentioned it before, when Linda started running last year shortly after me I had never seen her run at all in our 29 years of marriage. Since then she’s run something like 50 races, which is an amazing accomplishment for a 57-year-old woman whose previous athletic accomplishments could be summed up in two words: mall walker. This morning’s weather was iffy at best. I woke up at 4 a.m. and looked outside to see raindrops bouncing off the pavement. For about 2 seconds I was tempted to go back to bed, but se
1 comment
Read more 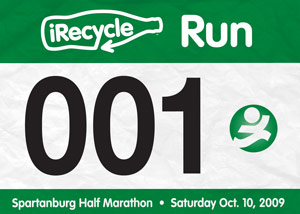 The iRecycle Half Marathon was my 4th half marathon in the past 28 days and probably won’t be going into my highlight reel. Of those four half marathons, this one was my slowest, with a finishing time of 1:42:10, a 7:48 per mile pace, which is about 30 seconds slower than last week’s HM. I definitely can’t blame it on the hills. There were a few hills in this race but actually less than in either of the three previous ones. Great course too, and scenic, winding around a local lake and through nice neighborhoods as well as a good portion of the Spartanburg greenway system. It was an unusually warm day for the middle of October, with the overnight low temperature about 70 degrees and the humidity above 90% at race time. I heard a few other people mention that they were bothered by the humidity and their times were a little slower because of it, so maybe that could have been part of my problem as well. Strictly Running was in charge of the race timing and they seem to always do a great
Post a Comment
Read more 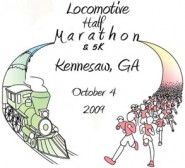 It was a great weekend for running, so Linda put up very little resistance when I broached the subject of driving a couple hundred miles to run a Sunday morning half marathon down in Kennesaw, Georgia, just north of Atlanta. We arrived on Saturday evening several hours after finishing the Komen 5k in Charlotte and we were happy to see that the host hotel, the Hilton Garden Inn, was just a couple minutes’ walk to the start and finish line for the race, so we were able to get a good night’s sleep, get up bright and early on Sunday morning, and walk to the starting line, then after the race we were able to get a shower before the awards ceremony. Linda seems to be doing better than ever with the  2XU  calf sleeves she has been wearing lately. She was first in her age group in the 5k and for the first time in months she’s not having pain in that area. I ran the half marathon and got 1st place in my age division with a time of 1:36:46, a new half marathon Personal Record for me by 3 minute
Post a Comment
Read more

This one’s in a class by itself. With approximately 15,000 participants, it’s by far the biggest race of the year in the Charlotte area, and for many people it’s the one race they attend each year. Actually, the competitive race itself isn’t nearly as big as the overall event itself, and probably about 12,000 of the participants walked the course instead of running it, to support the cause of finding a cure for breast cancer. No doubt it’s one of the most worthy causes as it has affected all of us in one way or another, if not directly at least through someone we know. Since this blog deals with the competitive side of the race, I’ll leave the important stuff like curing cancer to the Susan G. Komen Foundation, which seems to be doing an amazing job, and I’ll just talk a little about the competitive race. There were 1,453 finishers in the competitive 5k race, which started 30 minutes or so before the noncompetitive run/walk. I started up near the front so I could get out ahead of the
Post a Comment
Read more
More posts