On the Comeback Trail at Age 69

"It's far better to be coming back than going away." That's a quote that jumped out at me as I read Amby Burfoot's excellent newsletter this week. I've had quite a few comebacks during my first 13 years of running that began in 2008, but this one's the biggy.

From when I began running in September of 2008 to the beginning of 2020, just before the pandemic, there were brief periods that I was sidelined with injuries but I always came back relatively quickly. I averaged around 40 races a year, give or take, and loved the camaraderie I found in the running community.

During my very best racing years from age 58 to 62 I was able to keep my weight in the range of 138 to 143 pounds. Of course there are lots of factors involved in race performance, but for me, keeping my weight in check has been a struggle because I really like to eat, and I don't mean kale and broccoli. My preferences are more along the lines of ice cream, pizza, burgers, and fries, so it's been a never ending battle to eat healthy, which I try to do, albeit imperfectly. By early 2020 my weight had crept up to the low 150s, around 10 pounds heavier than ideal for me.

By the time the pandemic hit I was already thinking about giving up on running. I was having a hard time keeping up with the guys I used to run with. I had arthritis in both of my knees, a hip that bothered me anytime I ran more than a few miles, and back pain that developed in April of 2020 that still limits where I'm able to sit.

The pandemic also resulted in most races being canceled, so without the races as incentive and with all of my niggling aches and pains, I ran less and less each day. I finally decided that I'd stop running completely for a while to see if an extended period of time away from running might help, so for a couple months I didn't run at all. Instead of getting up early on Saturday morning to head to a race I stayed in bed, and it felt good. I told my wife that I was through with racing for good.

As enjoyable as it was to sleep in on Saturdays, there were some downsides. My fondness for junk food resulted in me gaining weight, so instead of being 10 pounds over my ideal running weight it became 30 pounds. The 50 pounds that I had lost on Weight Watchers back in 2008 were coming back quickly, and I knew something needed to be done.

Right around the first of the year in 2021 I decided that if I was going to be healthy I needed to get back to running and racing. My not-so-optimistic goals include running 100 miles per month and running a 5k in under 30 minutes as well as running the Myrtle Beach Half Marathon on June 1st in under 2:15:00.

Since I'm no longer able to run a mile without taking a walk break, I decided to give Jeff Galloway's Run-Walk-Run method a try. I had used it during my first year of running and had some success with it, but at that time I was in good enough shape that I really didn't need to take walk breaks so I put it on the back burner, thinking I would eventually come back to it at some time later in life if I felt I could benefit from it. So here we are.

After trying several different ratios recently in my training I've decided that the best option for me right now is 60:30. That is, I'll run for 60 seconds and then walk for 30 seconds, continuing that pattern until I'm finished. If I'm in a race I may try to go a little longer than 60 seconds, just depending on how I feel.

As I write this it's Friday night, February 26, 2021. Tomorrow will be my 69th birthday and I'm planning on running my first 5k race in over a year using the Run-Walk-Run method. I'm excited to get back to racing. I've been around long enough to not expect any miracles and I expect to finish somewhere between 27 and 30 minutes, depending on how things go.

All righty then! My first half marathon in a year and a half turned out to be a personal success for me. I entered 2021 determined to do my best to return back to running and racing, and for much of January I was bogged down at around 11- to 12-minute miles. When I signed up for this race I thought a realistic goal would be around 2:10. Of course that would be the end of my streak of 113 half marathons in a row under 2 hours, but that's a streak that will almost surely end this year anyway, regardless of how this race turned out. For the past few weeks my running has been improving, thanks in part to more consistent running and also due to the fact that I've lost 17 pounds since January 1st. I was actually around 30 pounds over my ideal racing weight at the beginning of the year so I've still got work to do on the weight, but I'm definitely feeling better. My Garmin measured the distance at 13.23 miles at a time of 1:56:17 for a pace of 8:47, and I started my watch as I
Read more

Wanting to make up for lost time and get back into racing shape, I decided to sign up for the Vac & Dash Spring Trifecta 5k Series. It's a series of three races, all on Sunday afternoons at 3 p.m. in March and April. I've always preferred afternoon races, and I like Sunday races because they don't interfere with Saturday races just in case you'd like to run two races on a weekend. This was the first race in the Trifecta Series, and it was the first time I've visited Locust, which is a beautiful little city between Charlotte and Albemarle. The Town Center provided a perfect venue for a race and the weather was perfect. I definitely didn't set any speed records, but I did meet my more realistic goal of running under 27 minutes. Two weeks ago at a similar race my time was 27:39, and having changed my run/walk ratio in favor of more running and less walking, I thought I might be able to get a little faster time. I ran a minute and 4 seconds faster in this race a
Read more

The second of Vac & Dash's Spring Trifecta Series of Sunday afternoon races, the Easter Eggstravaganza 5k was held at the Badin Drive-In theater. Being on Easter day there weren't a lot of runners -- only 50 finishers. That mattered little to me though as I'm just trying to run a race each week as I get back into race shape as best I can. After last week's half marathon I felt a little slowed down with heavy legs as I did my regular running routine throughout the week, but I felt okay on race day. My goal was to finally crack 26 minutes. This was my fourth 5k during this comeback stretch and each time I've been a little faster.  As you can see by the graphic below, I didn't quite crack 26 minutes, but I was close at 26:06. That's 19 seconds faster than my last 5k on March 14th and a minute and 33 seconds faster than the first 5k of my comeback on February 27th (my 69th birthday by the way). So I'm making progress little by little. I'm realistic e
Read more

The plan was to drive the camper van the 100 miles or so just north of Greenville, camp out, and enjoy watching some of the 48-hour, 24-hour, and 50k ultramarathon races before running the 5k myself on Sunday morning. Turns out that by the time we arrived on Saturday afternoon there was a huge storm coming through and it rained the rest of the evening. That didn't deter the ultra runners but it did keep Linda and I hunkered down in the van until Sunday morning. I paid an extra 25 bucks for a camping spot in the designated RV camping area but it was packed when we got there. We were able to park right at the starting line/timing mat which we did for about 30 minutes until we decided that the nonstop music blasting from the speakers was way too loud for our 69-year-old ears, so we opted to cross the street and park in the "Day Use" parking area which was a much tamer option.  No doubt the focus of this racing event was the ultra distances, so the 5k on Sunday morning seemed
Read more 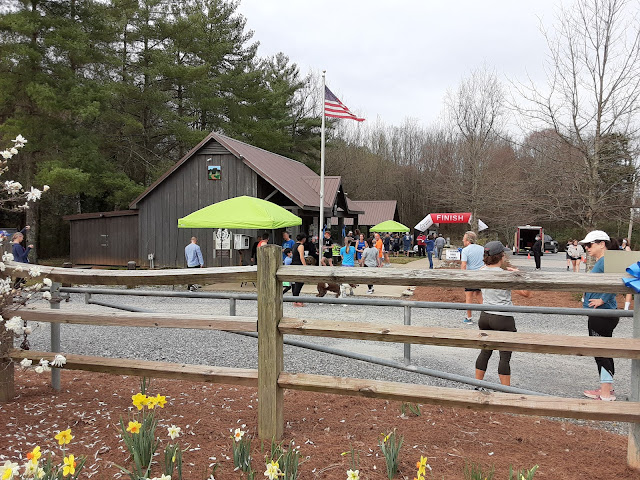 It's been a full year since the Covid-19 pandemic hit, and with the hope that it's mostly behind us now the local races are starting to pop up along with the spring flowers. The Kings Mountain Gateway Trail is actually just over the county line in Cleveland County but this year the race marks the first entry for the Gaston County Race Series, which was canceled last year because of the virus but is being brought back this year, albeit with probably fewer races than in past seasons.  Since I'm a Gaston County resident and a runner, I've enjoyed supporting the race series and will continue to do so. During the last season (2019) of the race series I finished 2nd overall, partly due to some decent race times but more so due to showing up for pretty much every race. This year doesn't hold that much promise for me personally since I'm not running that well. Also, some of the races will be "virtual," meaning that you just run the race at a place and time of
Read more